Walking the hills and valleys of Edo 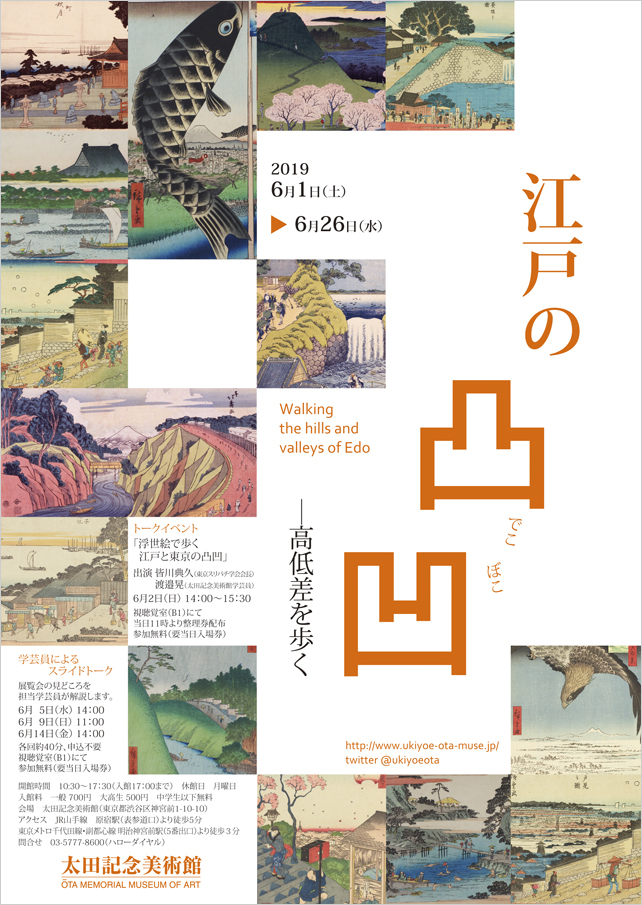 In recent years, walking around the city with its unique topographical aspects, such as high ground and low ground, slopes and undulating terrain, is often covered on television and in books, and has gradually gained a quiet popularity. We can enjoy a stroll in Tokyo while experiencing different elevations and the special characteristics of Musashino Plateau in the west, the low-lying land lying to the east, rivers such as the Kanda river and Meguro river and the valleys along the traces of the ancient rivers. Ukiyo-e artists such as Utagawa Hiroshige often portrayed the city of Edo with landscape pictures that demonstrated an awareness of these topographical aspects. Although the townscape is now greatly different from the Edo Period, the hills, valleys and slopes remain almost unchanged in present Tokyo. This exhibition focuses on such topographical features of Edo depicted in ukiyo-e. By looking at ukiyo-e and comparing the topographical characteristics of Edo and present Tokyo, we hope that you can feel much closer to the landscapes of Edo. 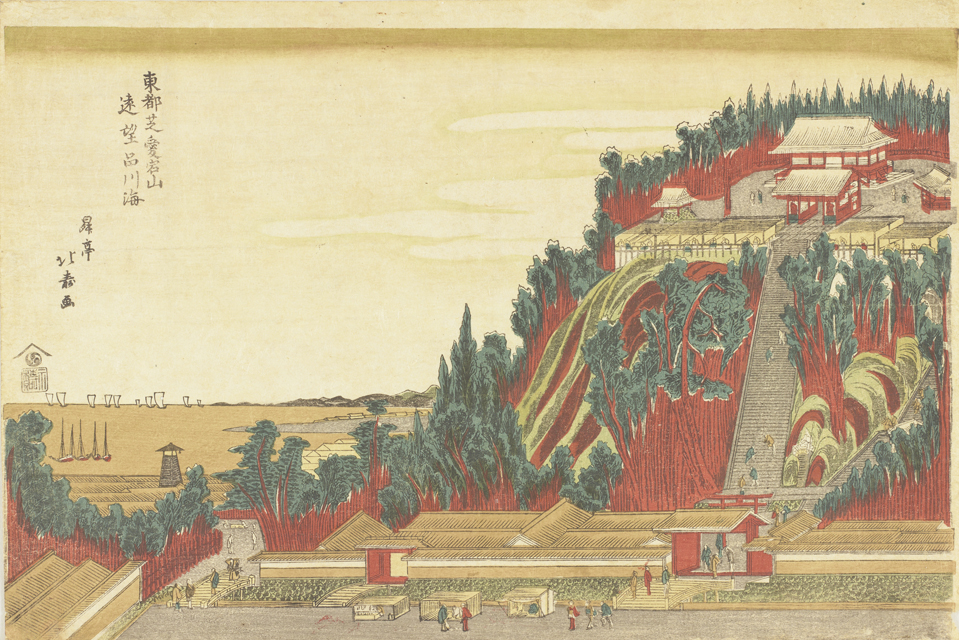 Views from mountains and highland plateaus

Views from high places such as mountains and highland plateaus were often depicted in ukiyo-e as the subject of the landscape pictures of Edo. Many shrines and temples were located on the top of the mountains or on high ground that had good views, and these places were popular for their beautiful landscapes. Here, we will also introduce the places made by human hand to enjoy scenic views such as Fujizuka, an artificial mountain, and Sansō-dō Hall of Gohyakurakan-ji Temple. 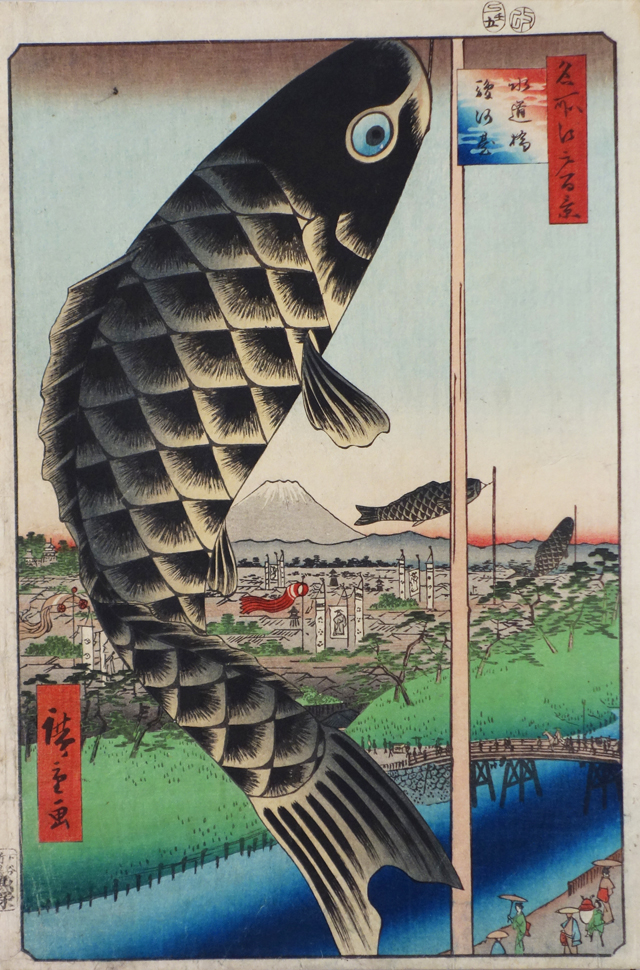 Walking around the valleys and lowlands

To the east of the city of Edo, low-lying areas spread out around Edo Bay and the Sumida River, and there are many valley-like landforms that can be seen at the edge of the higher ground and around the rivers. Moreover, land was actively reclaimed from the sea in the Edo Period. Hibiya is one place reclaimed from the sea in the early Edo Period, and Tsukiji is also a place located at a low sea level that was expanded by land reclamation. Here, we will introduce valley-shaped landforms and lowlands near water depicted in ukiyo-e. 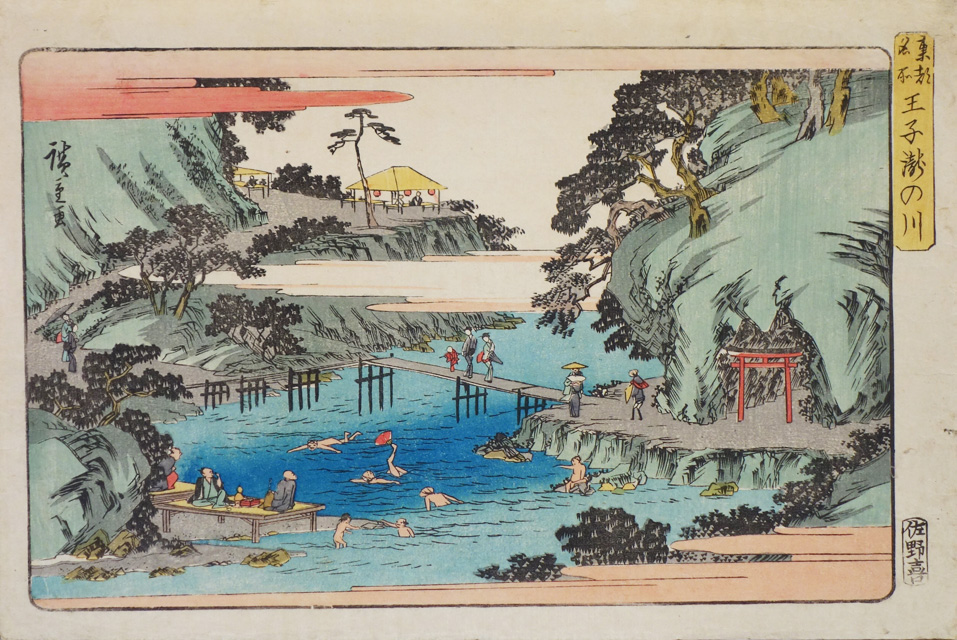 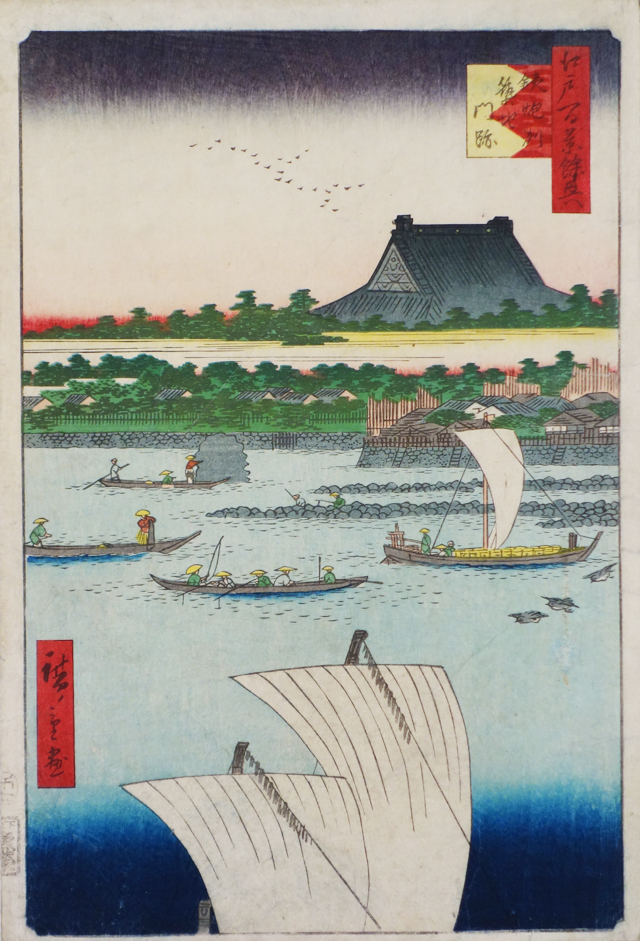 When there is a topological gap, a slope connects the higher and lower places. Slopes are one of the most popular features for many people who like walking around Tokyo. Famous slopes are also the subjects of ukiyo-e pictures. Since many slopes still retain the same name in the present day, it might be interesting to visit those places after enjoying the view of the slopes in ukiyo-e. 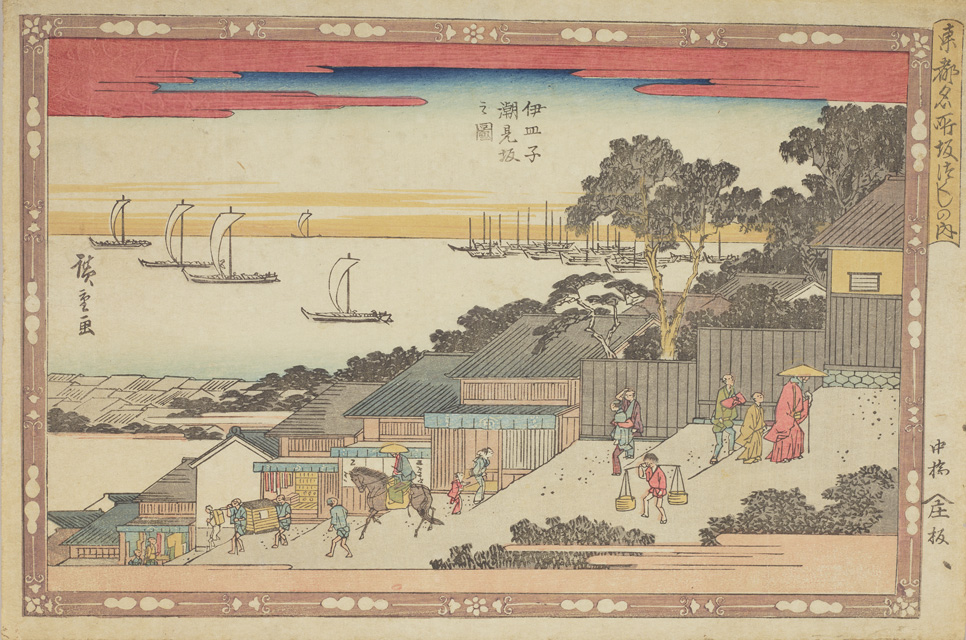 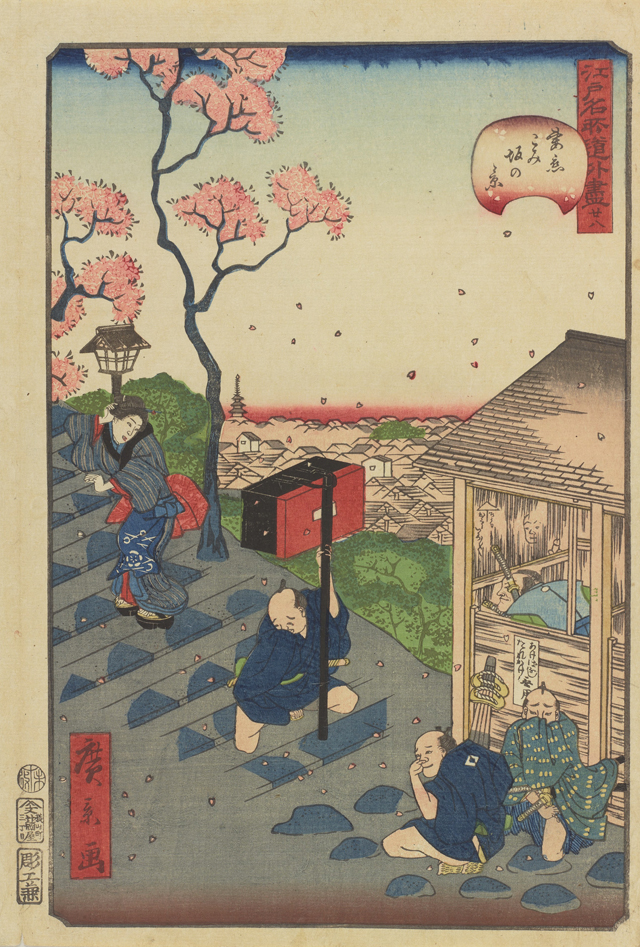 Utagawa Hiroshige “Comical Views of Famous Places in Edo : No. 28, View of Gomizaka”

Ukiyo-e artists often depicted the Edo city by imagining the view looking down from the sky. They portrayed landscapes with topographical characteristics such as mountains, valleys and water channels that were found throughout Edo city. Let’s take a look at some landscapes in Edo city drawn with the bird’s-eye view technique in this last section of the exhibition. 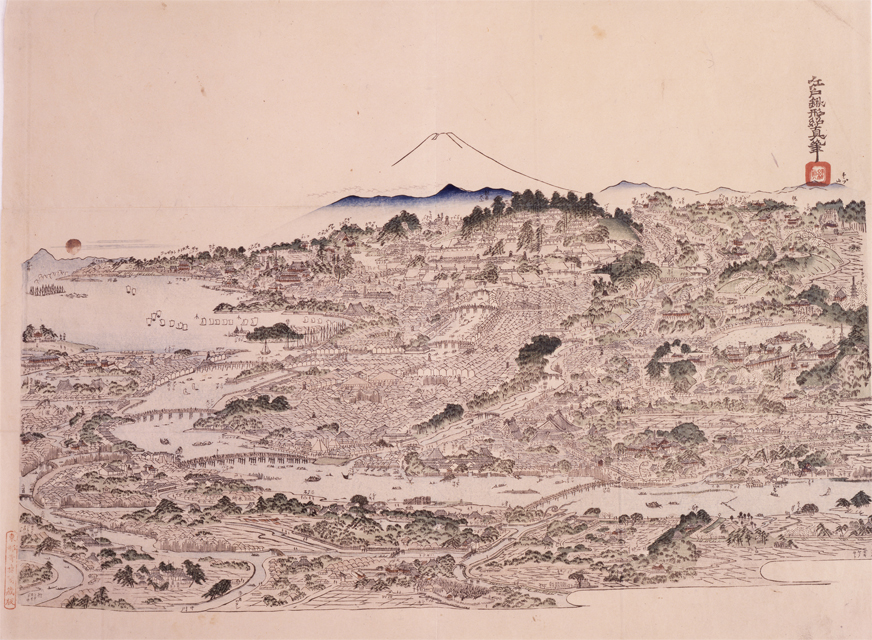 Utagawa Hiroshige “One Hundred Famous Views of Edo : Seidō and the Kanda River from Shōheibashi Bridge” 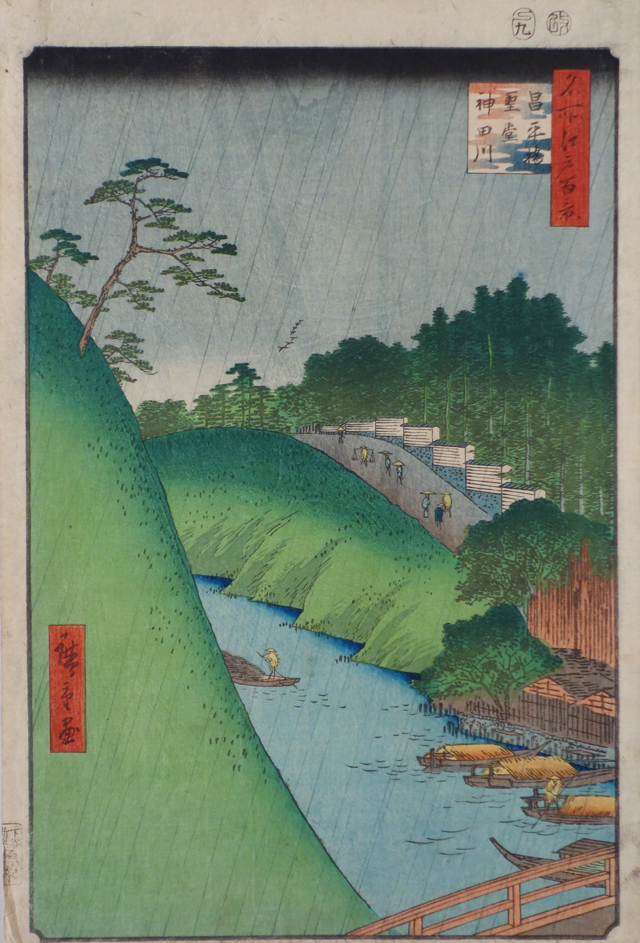 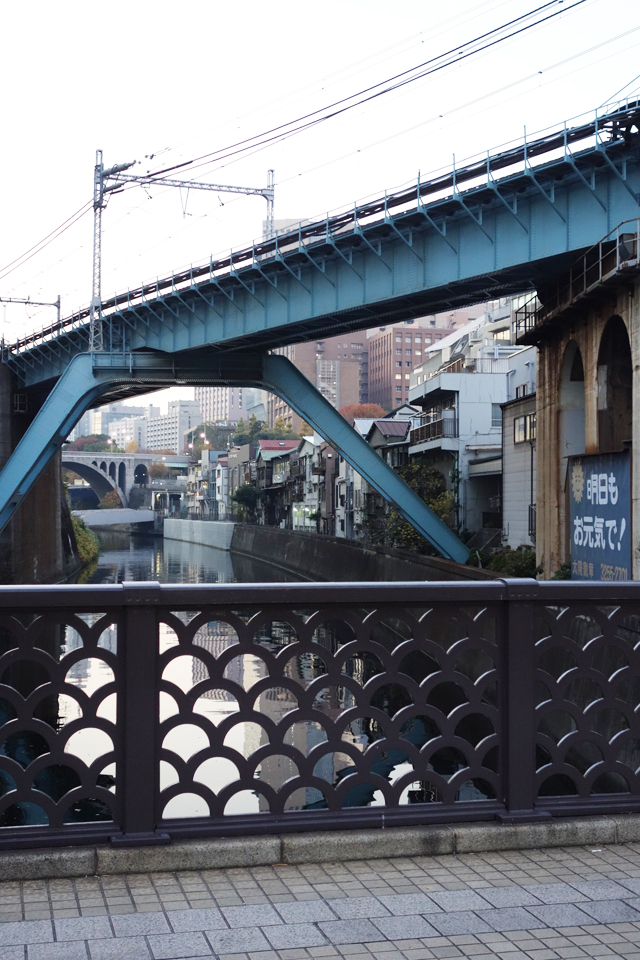 The picture shows the viewpoint from Shōheibashi Bridge with the Kanda River flowing past in front and Yushima Shrine on the right. A huge sheer cliff is seen on the left. The area around Ochanomizu, known as one of the best landscapes in the city with its rich topographical characteristics, was actually an artificial valley created through the public works in the Edo period. This area was originally a highland plateau called Kandayama, and Sendai Domain was ordered by the government to create the Kanda River by clearing the land. It was completed in 1661, the era of Date Tsunamura. It is said that Date Masamune was also involved in this construction. From the view of the landscape and the picture, we can imagine the monumental effort of Sendai Domain, and the high level of engineering skills in the Edo period at the same time.