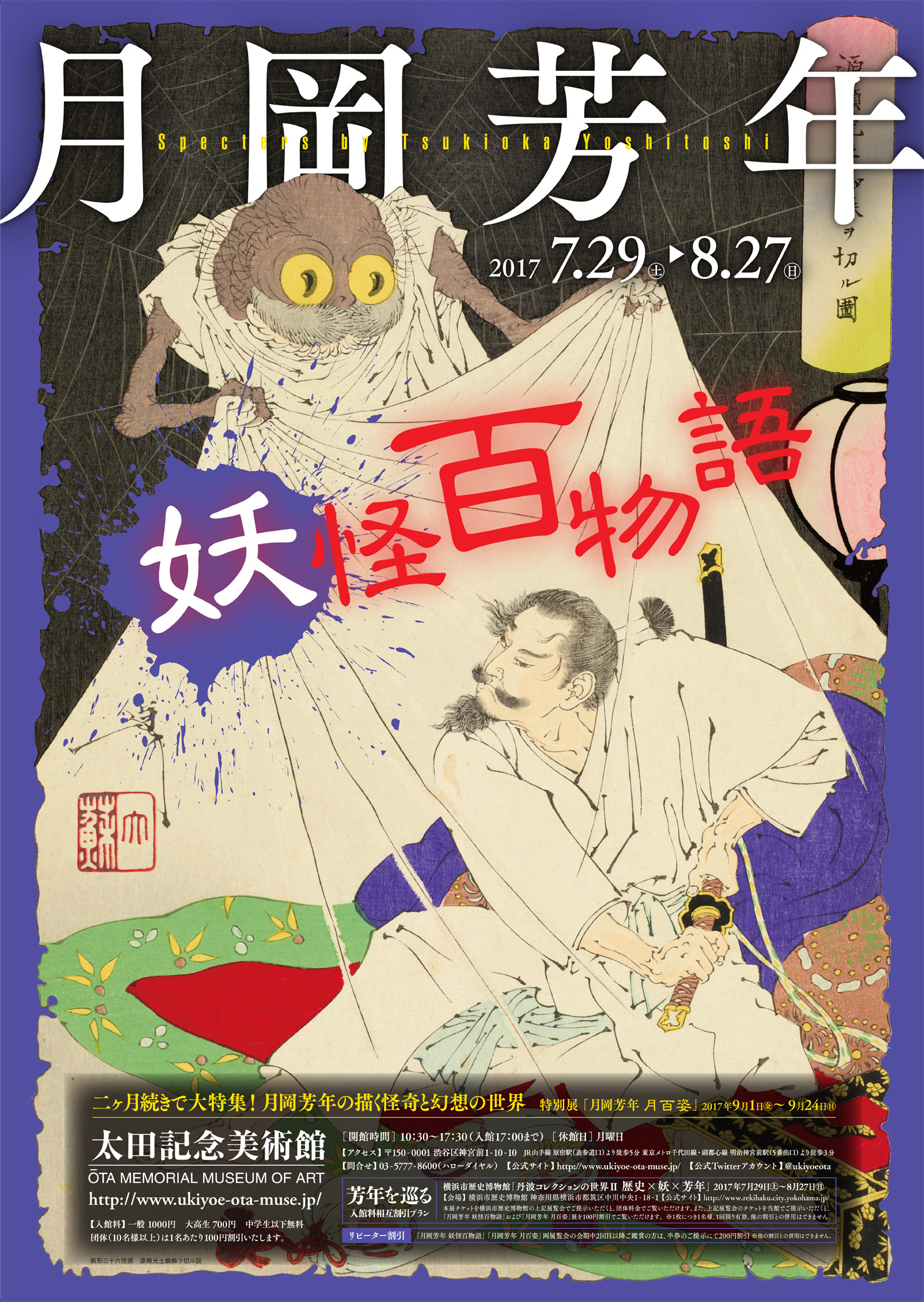 Tsukioka Yoshitoshi (1839～1892) was an ukiyo-e artist who lived from the end of the Edo period to the Meiji period, and was a pupil of Utagawa Kuniyoshi. He was one of the leading and the most popular ukiyo-e artists in the Meiji period. Yoshitoshi produced a wide range of pictures, such as “warrior pictures”, “historical pictures” and “pictures of beautiful women”; however, what he focused on most throughout his life were “pictures of Yōkai (specters)” which took themes from mystic stories of history, legends, novels and plays. There is an anecdote that Yoshitoshi often saw ghosts, and he was also good at telling scary stories. It is said that he sometimes participated as a storyteller in “One Hundred Ghost Stories” gatherings (an event at which people gather to recount and listen to one hundred mysterious stories.) Among the large number of Yoshitoshi’s works, a set of pictures “One Hundred Ghost Stories of China and Japan”, which consists of 26 pictures produced in the early stage of his career as an artis, and a set of pictures “New Forms of Thirty-six Ghosts”, which consists of 36 pictures produced in his last years, are known as the masterpieces of “picture books of specters” in which a lot of specters and mysterious creatures appear. In this exhibition, we will exhibit the complete works of both “One Hundred Ghost Stories of China and Japan” and “New Forms of Thirty-six Ghosts”, as well as about 100 pictures from his early years to his later years, introducing Yoshitoshi’s world of “pictures of specters”.

Exhibiting about 100 “pictures of specters” by Tsukioka Yoshitoshi

Tsukioka Yoshitoshi showed his interest in mysterious subjects for his paintings from his early days as an artist, and continued drawing specters throughout his career. It is considered that Yoshitoshi was influenced by his master Utagawa Kuniyoshi, who excelled in painting specters. It is also said that Yoshitoshi himself had a feeling of closeness to mystic creatures, and the story of him often seeing ghosts has been passed down. There is an anecdote that he was good at telling scary stories and he used to read out “One Hundred Ghost Stories” to his adopted daughter. In this exhibition, we will introduce the fascinating specters drawn by Yoshitoshi, which are terrifying but sometimes humorous. 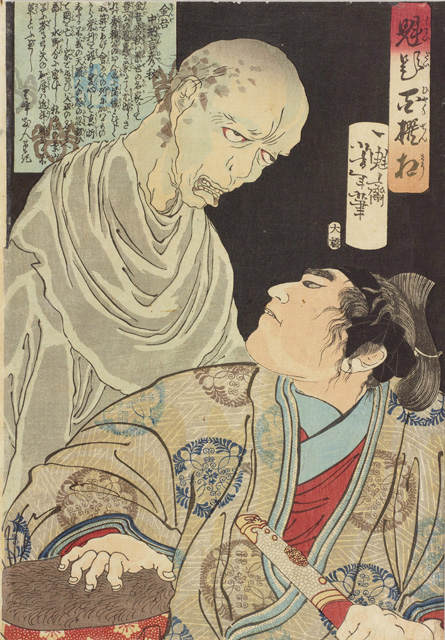 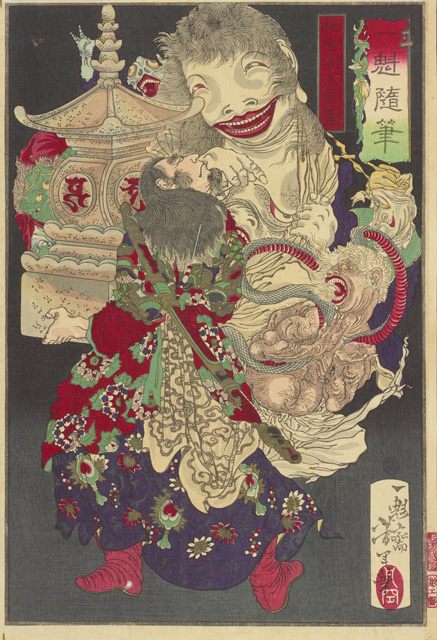 The complete works of “One Hundred Ghost Stories of China and Japan”, a set of pictures from Yoshitoshi’s early years

“One Hundred Ghost Stories of China and Japan” was published in 1865, which was Yoshitoshi’s 27th calendar year. This was the first series of pictures depicting specters by Yoshitoshi, consisting of 26 works. The phrase “One Hundred Ghost Stories” in the title originally represented a gathering in which a group of people got together to tell scary stories, but later it came to be used as a title for a book compiling scary stories. This series of works widely collected scary stories from Japan and China, which were collectively called Wakan. As a promising ukiyo-e artist, Yoshitoshi in his younger days put a lot of effort into this book of specter pictures. 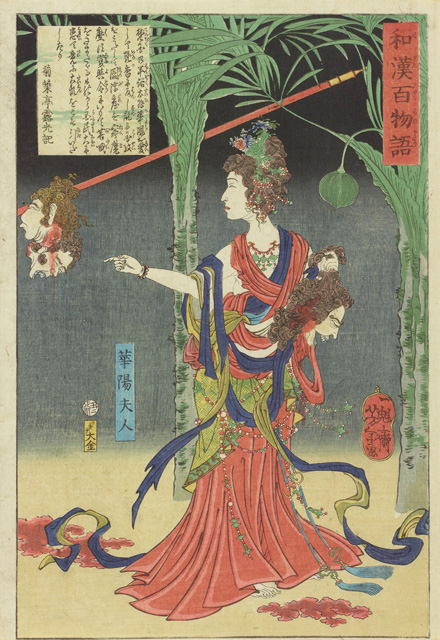 “One Hundred Ghost Stories of China and Japan : Lady Kayō” 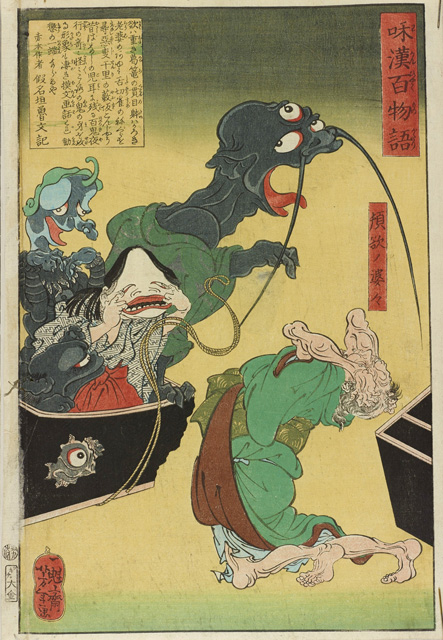 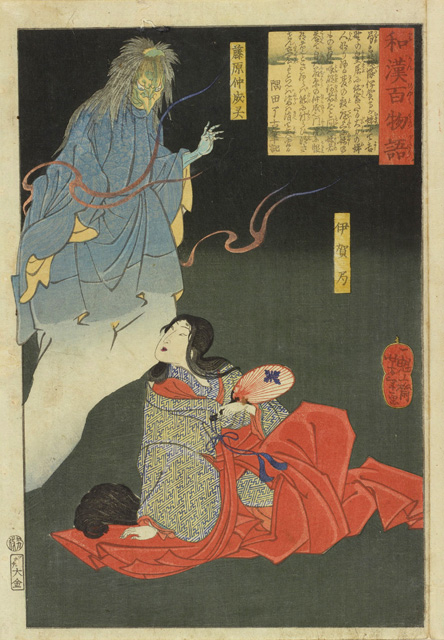 “One Hundred Ghost Stories of China and Japan : Iga-no Tsubone”

The complete works of “B”, a set of pictures from Yoshitoshi’s latest year

“New Forms of Thirty-six Ghosts” is a series of 36 pictures depicting specters, which was published from 1889 to 1892 in the Meiji period. Yoshitoshi was in his 51st year when its publication started, and some of the pictures were published after he died in 1892. It is literally a masterpiece of his latest years, and is also a compilation of the specter pictures which he had been working on for all those years. It is considered that the word “新形 shin-kei (new style) ” in the title is homophone of such as “神経 shin-kei (nerve) ” and “真景 shin-kei (actual scene) ” which were trendy words at the time. 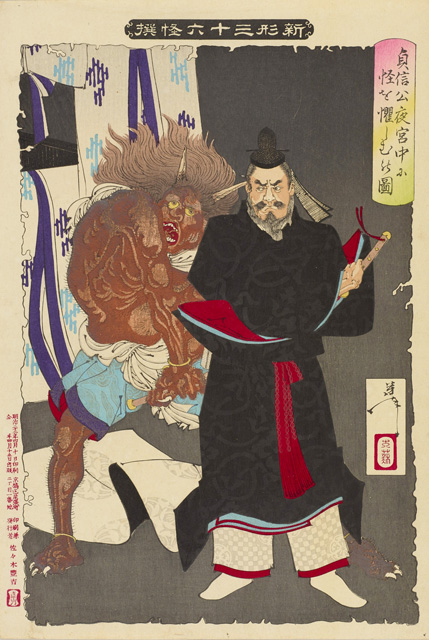 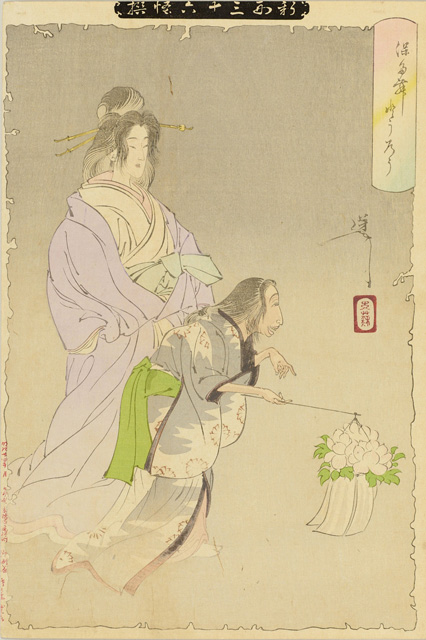 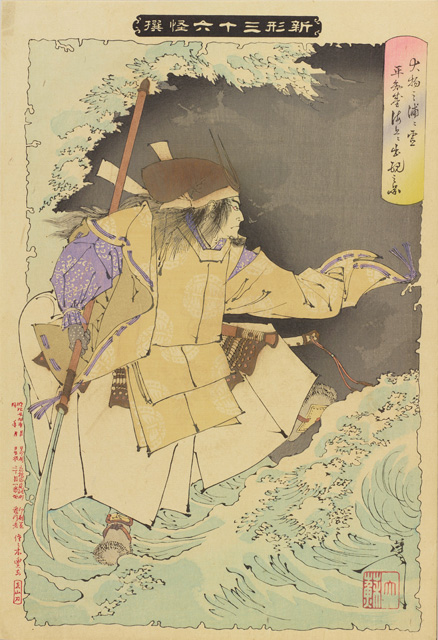 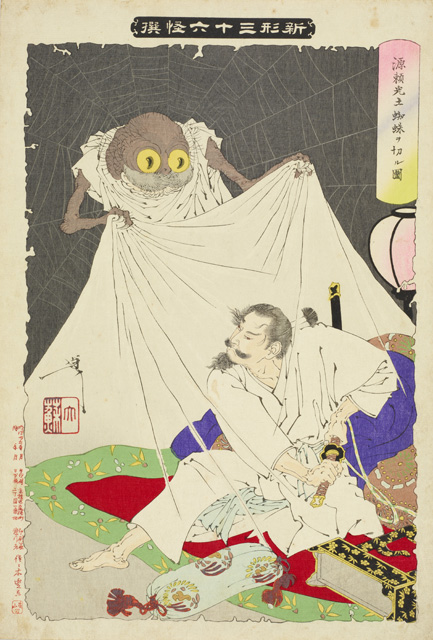 This is a picture of Minamoto-no Yorimitsu hunting Tsuchigumo, which is based on a story from Tsurugi-no Maki (Book of Swords) of Tale of the Heike and Record of the Great Peace. One night while Yorimistu, a warrior of the Heian period, was attacked by a disease and lay sick in bed, a priest appeared out of nowhere, and tried to bind him with a rope. Yorimitsu was startled but quickly responded to slash him with his legendary sword “Hizamaru” that was kept at his bedside. His followers, the four guardians who were on night duty in a different room, also rushed to help him. As they hunted down the traces of blood, they found a giant spider (Tsuchigumo), and they bravely exterminated it. Yorimitsu’s legendary sword “Hizamaru” came to be called “Kumokiri” (to slash a spider) after this incident. In this powerfully composed picture, Yoshitoshi depicted the moment of Tsuchigumo, disguised as a priest, trying to bind Yorimitsu with a semi-transparent spider’s web, while Yorimitsu is about to draw his sword “Hizamaru”. The depiction of the yellow goggling eyes of Tsuchigumo is striking.