Fashion in the Yoshiwara Pleasure Quarter 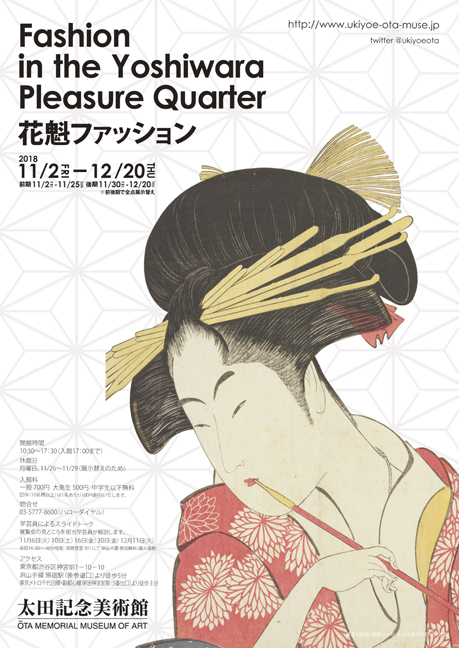 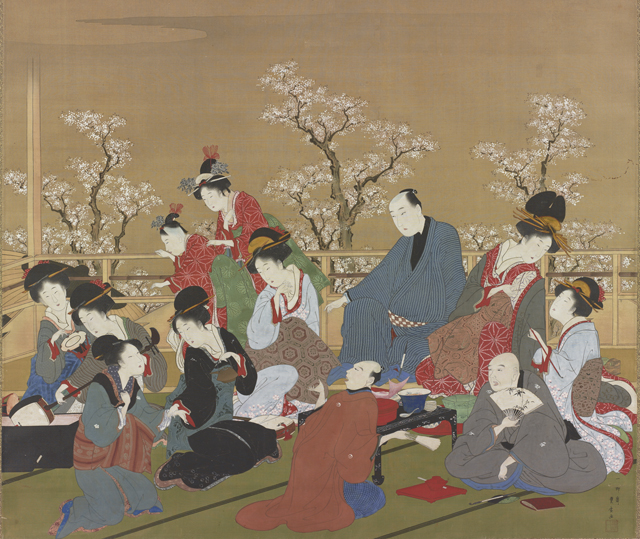 The Yoshiwara flourished as a prominent pleasure quarter. The highest-ranking courtesans, called Oiran, were the top of the hierarchy of the Yoshiwara. Even today Oiran are depicted as heroines in many films and manga, and their otherworldly charms still appeal to people. Although their gorgeous fashion may be the first thing we think of when it comes to Oiran, they were required not only to be beautiful, but also to be educated and to have excellent entertainment skills. In the Edo period, many famous people of the time, including samurai and wealthy townspeople, visited Oiran frequently. The Yoshiwara sometimes played a role as a cultural salon. On the other hand, people in Edo understood Oiran’s severe circumstances and called the Yoshiwara “Kugai” (place of universal suffering). They sometimes figuratively referred to Oiran as saints such as Fugenbosatsu (also known as Samantabhadra: a Buddhist saint who represents the method, meditation and training for spiritual enlightenment).
This exhibition features Oiran’s fashion and their daily lives in the Yoshiwara. Through the works of ukiyo-e, visitors can experience the charm of the courtesans, who had a unique presence in Edo culture.

Gorgeous fashions of the Oiran

Oiran were expected to be beautiful more than anything. Their unique fashions were often depicted in ukiyo-e, such as gorgeous hairstyles decorated with many ornamental hairpins, splendid kimono which were made anew for each season, Obi sash tied in front of the body and wooden clogs with three teeth. Even though fashion trends changed over time, courtesans’ fashions were always the trend-setters. It was not practical for ordinary women to copy Oiran’s fashions, however, there is no doubt that the latest fashions worn by Oiran were of great interest to them. 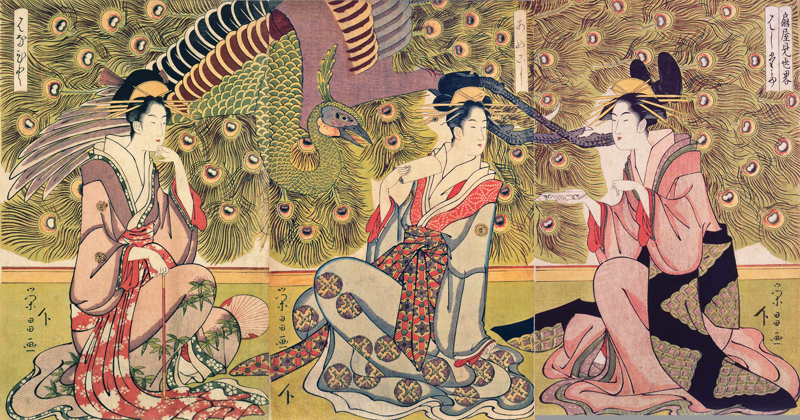 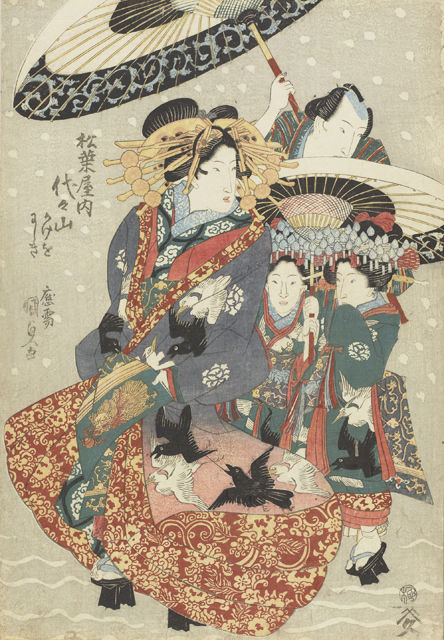 Utagawa Kunisada “Courtesan Yoyoyama of the Matsuba-ya House with Her Attendants, Kakeo and Nishiki” (2nd term) 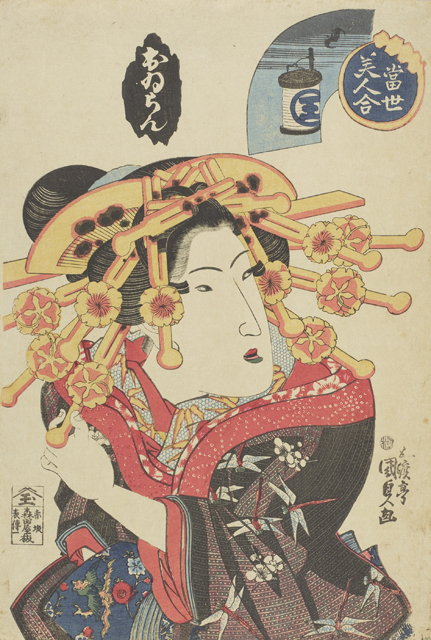 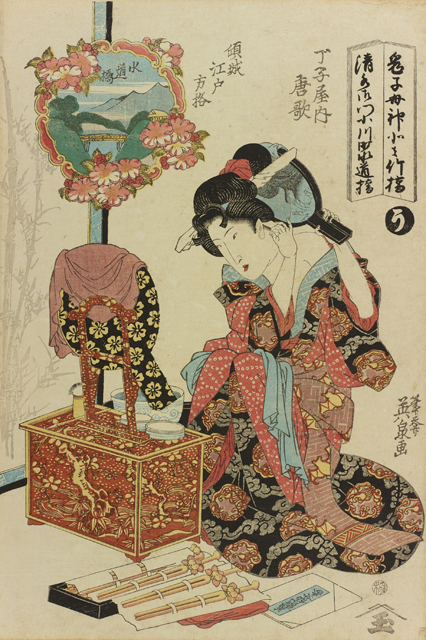 Life in the brothels

Some ukiyo-e depicted the human sides of Oiran’s lives such as: reading a letter eagerly, taking care of their customers, being jealous, or relaxing with their colleagues. In this section, we will introduce how Oiran spent their time in the brothels, both in working hours and off-duty hours. 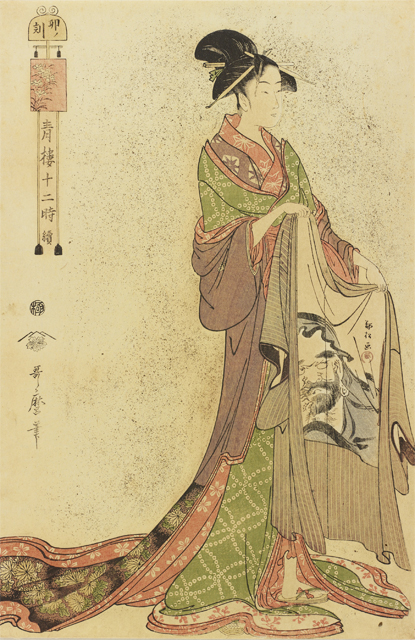 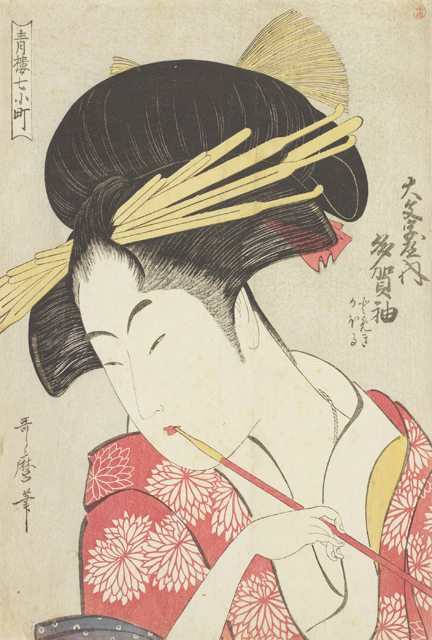 The world of hand paintings

The original paintings of “bijin-ga” (pictures of beautiful women) formed a popular genre that had been produced since the early period of ukiyo-e. Among those “bijin-ga,” the pictures depicting courtesans were especially gorgeous and carefully painted; and sometimes they were collected by prosperous people such as Daimyō (feudal lords). In this exhibition we will present the high-quality original paintings from the collection of the Ota Memorial Museum of Art. We hope you enjoy the elaborate and fashionable “bijin-ga” that show you a different world from wood block prints.

Chōbunsai Eishi “One Day in the Yoshiwara” (2nd term)

The procession of Oiran is held under a cherry blossom tree. The Oiran in the center wears a black overgarment with pine needle patterns, and the contrast between it and the red kimono with cherry blossom patterns creates a luxurious effect. The girls on either side of the Oiran are Kamuro (Oiran’s attendants). There are two women behind the Oiran: the one on the right is a Furisode shinzō (trainee courtesan), and the other on the left is probably a Bantō Shinzō (retired courtesan) who took care of the Oiran and taught how to attract customers. All women wear kimono with the same or similar patterns as the Oiran, making this picture very flamboyant. An Oirandōchū (a procession of Oiran accompanied by her attendants that marched through streets to meet up with customers) was allowed only for the highest-ranking Oiran.