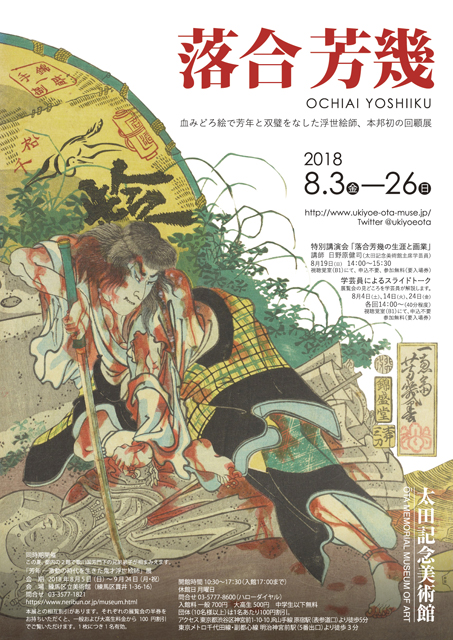 Ochiai Yoshiiku (1833~1904) was an ukiyo-e artist from the end of the Edo Period to the Meiji Period. He has created works which are essential to the history of ukiyo-e, such as“Twenty-eight Famous Murders with Verse”, a series of chimidoro-e (bloody paintings) which Yoshiiku and Tsukioka Yoshitoshi collaborated together, and “Shimbun (newspaper) Nishiki-e” that illustrated Meiji news articles with ukiyo-e. However, he had not attracted the public attention because of the other well-known ukiyo-e artists, namely Tsukioka Yoshitoshi, Kobayashi Kiyochika and Kawanabe Kyōsai. This will be the world’s first exhibition that sheds light to the entirety of the works of Yoshiiku, introducing more than 80 pieces of pictures including his most representative works. 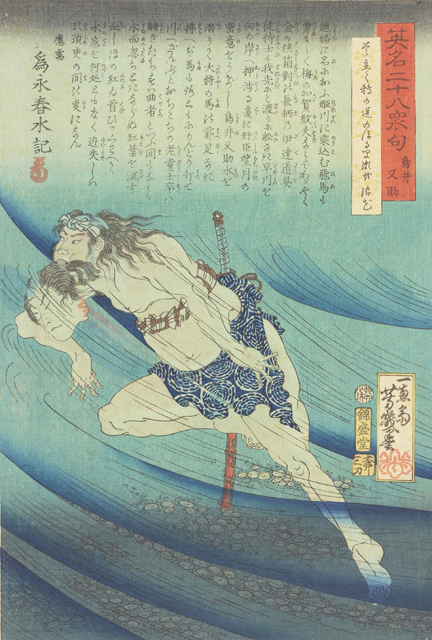 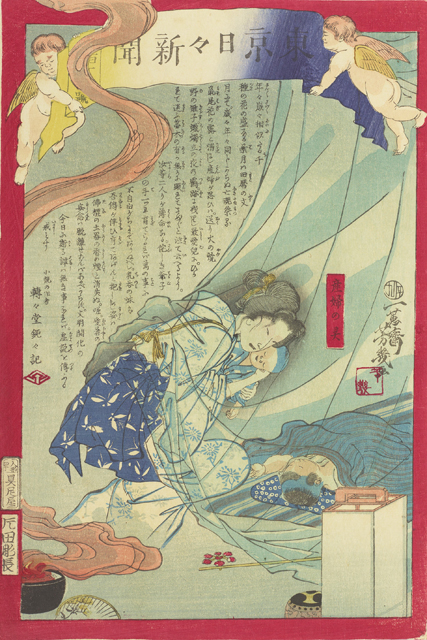 “Illustration Based on the Newspaper “Tokyo Nichi Nichi Shimbun” : No. 101” 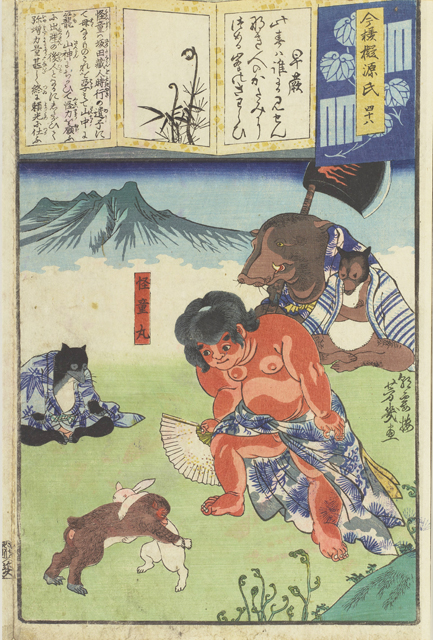 As a pupil of Utagawa Kuniyoshi, Ochiai Yoshiiku printed various genres of ukiyo-e at the end of the Edo Period, including “giga (caricatures)”, “pictures of beautiful women”, “warrior pictures”, “portraits of kabuki actors” and “Yokohama-e (foreigners and scenes of Yokohama)”. In the Meiji Period, he was active in areas beyond the genre of ukiyo-e, by taking part in the launch of a kabuki magazine and a newspaper called Tokyo Nichi Nichi Shimbun (now Mainichi Shimbun). In the past, Ota Memorial Museum of Art had introduced ukiyo-e artists who had not been in the limelight, such as Utagawa Yoshitsuya, Utagawa Hirokage and Mizuno Toshikata. In this exhibition, we are presenting the artistic world of Ochiai Yoshiiku.

When considering representative works of Yoshiiku, it is essential to acknowledge“Twenty-eight Famous Murders with Verse” , a series of pictures which Yoshiiku and his junior disciple Tsukioka Yoshitoshi collaborated in creation. As indicated in the title chimidoro-e (bloody paintings), they skillfully depict the brutal scenes of murder in kabuki plays and kōdan (storytelling). Yoshiiku and Yoshitoshi each printed 14 pieces to complete the series. In this exhibition, we not only introduce all 14 pieces created by Yoshiiku, but also various chimidoro-e. 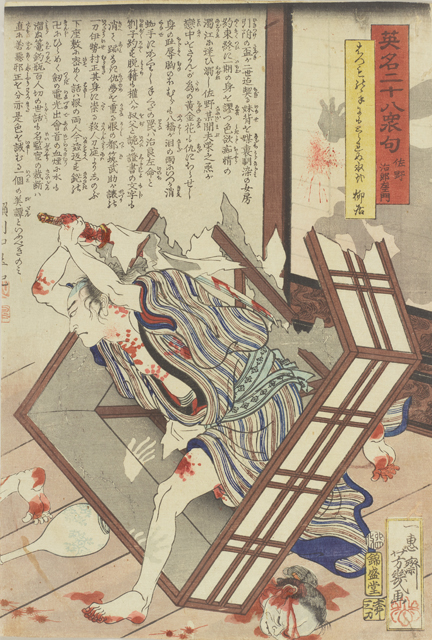 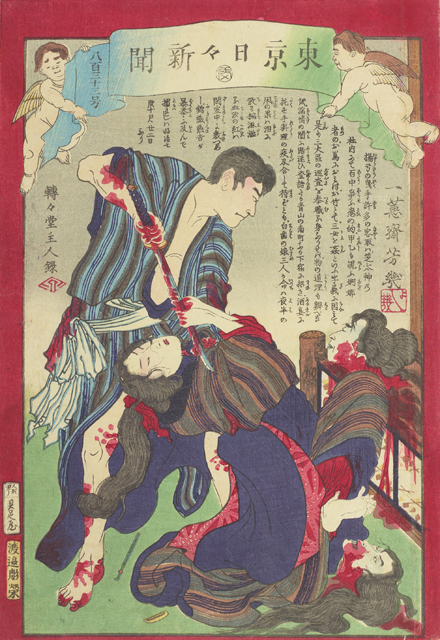 “Illustration Based on the Newspaper “Tokyo Nichi Nichi Shimbun” : No. 833”

Utagawa Kuniyoshi, the master of Yoshiiku, drew animals as humans and actively learned from painting techniques of foreign countries. Yoshiiku inherited such styles of his master and created many pictures with unique ideas, such as parody pictures depicting fish as portraits of kabuki actors, pictures drawn in silhouette, and photo-like pictures. Please enjoy the humorous styles of expressions by Yoshiiku. 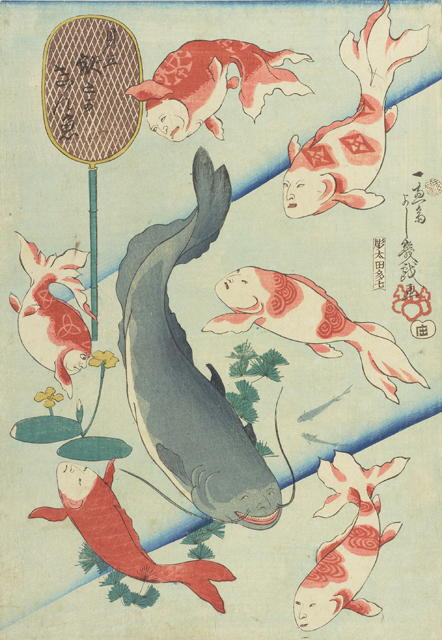 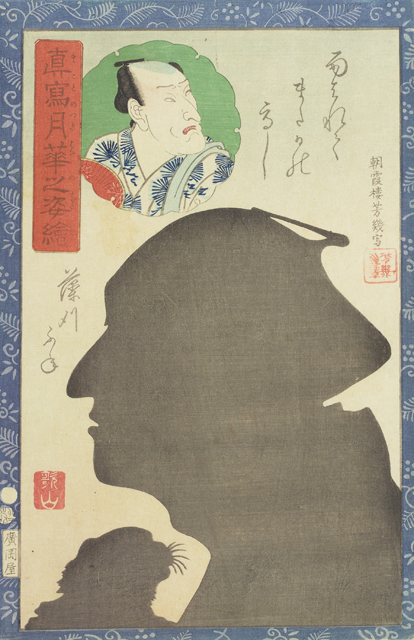 Nerima Art Museum is hosting an exhibition “Yoshitoshi, a genius ukiyo-e artist who lived during the turbulent period” from August 5th (Sun) to September 24th (Mon). They will exhibit all the pictures from “Twenty-Eight Famous Murders with Verse” which Yoshiiku and Yoshitoshi vied in creation. It will be the best opportunity to compare the works of two rival artists, Yoshitoshi and Yoshiiku. 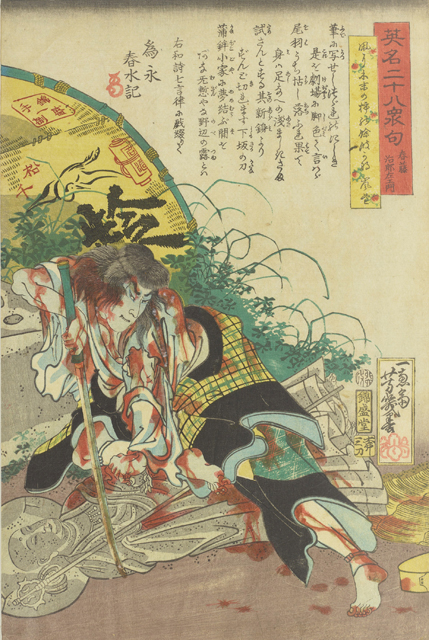 “Twenty-eight Famous Murders with Verse” is a series of pictures which Yoshiiku and Yoshitoshi collaborated in creation. It is a representative work of chimidoro-e (bloody picture), depicting brutal scenes in kabuki plays and kōdan (storytelling). This picture shows Shundō Jirōzaemon who disguised himself as a poor man to achieve his revenge. He has miraculously survived through the deceptive attack by the ones who suspected his true identity. Although he is covered with blood and has a pale face, the intensity of his gaze shows us the strength of his volition to accomplish his revenge.