Masterpieces of ukiyo-e paintings from Ota Memorial Museum of Art 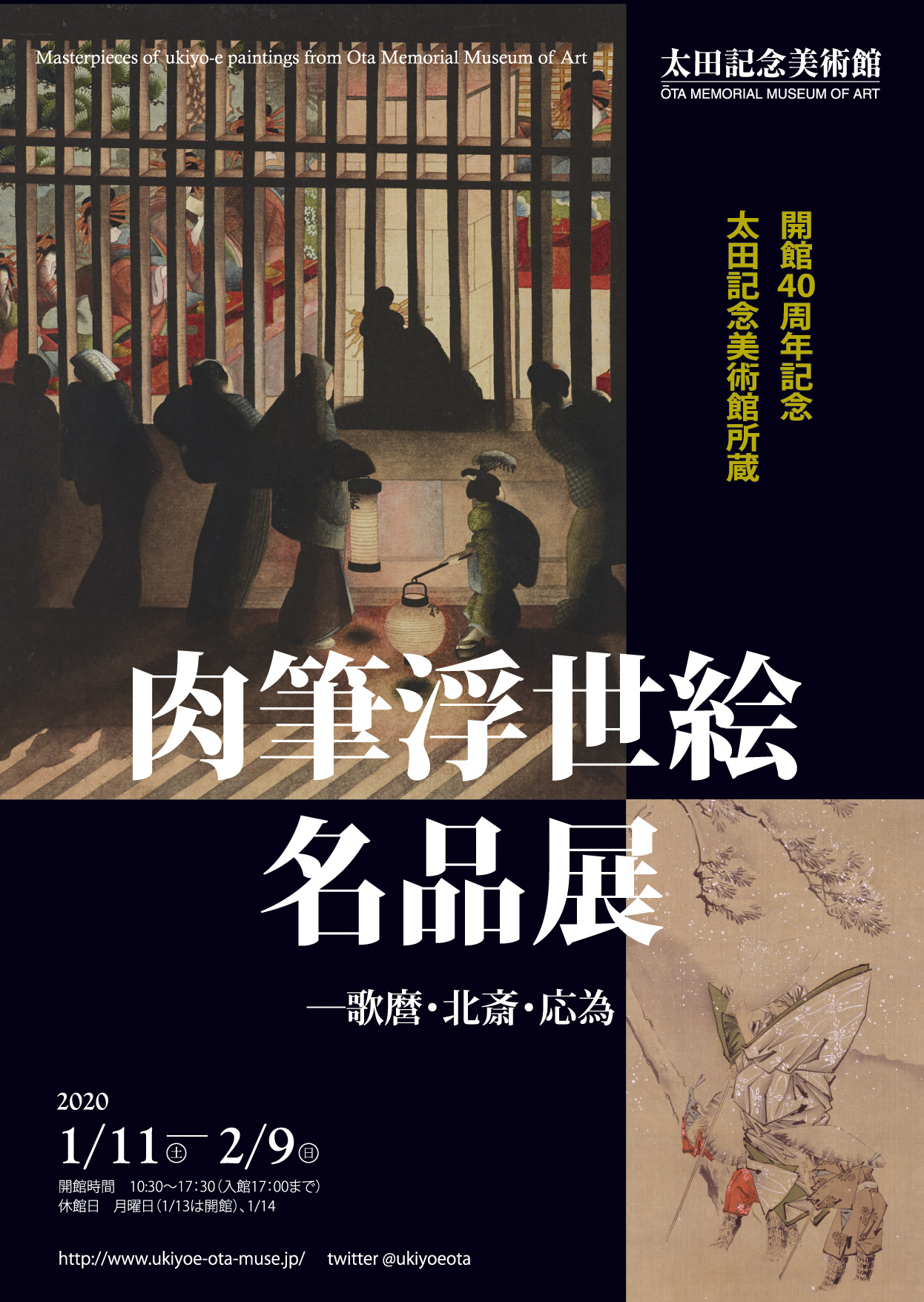 Ōta Memorial Museum of Art located in Harajuku specializes in ukiyo-e. The museum has a collection of about 14000 pieces that were mainly collected by Seizō ŌtaⅤ(1893~1977), who was the former president of the Toho Mutual Life Insurance Company, throughout his lifetime. Since the museum in Harajuku opened in January 1980, it has continued to be active as one of the few museums specializing in ukiyo-e in Tokyo, and celebrates its 40th anniversary this January. Commemorating this, we will exhibit selected nikuhitsu-ga (hand-painted pictures) from our wide-range of collections in this exhibition. Compared to ukiyo-e woodblock prints which are made by the combined labor of painters, carvers and printers, nikuhitsu-ga are drawn by the artist. We can see the artists’ brush strokes and understand their techniques from nikuhitsu-ga. Started from Hishikawa Moronobu, the ukiyo-e artist of the early period, we will introduce the masterpieces of famous artists such as Kitagawa Utamaro, Katsushika Hokusai and Utagawa Hiroshige, and Kobayashi Kiyochika and Tsukioka Yoshitoshi who were artists active in the Meiji Era. We would also like to you to enjoy the competition of the genius father and daughter Katsushika Hokusai and Katsusika Ōi’s works: “Tiger in the Rain” painted by Hokusai in the year of his death at the age of 90, and “Courtesans Displaying Themselves through the Lattice in Yoshiwara” painted by Ōi, whose total number of confirmed works worldwide is only about 10 pieces.

Katsukawa Shunshō “Kitten and a Woman”

Marking the 40th anniversary of Ōta Memorial Museum of Art

Late Seizō Ōta Ⅴ had learnt that ukiyo-e was highly valued overseas while traveling to Western countries, and started to collect ukiyo-e after being fascinated by the kachō-ga (flower-and-bird paintings) of Katsushika Hokusai exhibited at The Art Institute of Chicago. The size of the collection he made throughout his life reached about 12,000 works, and the Ōta Memorial Museum of Art was opened after his death by his bereaved family on January 13th, 1980. Ōta Memorial Museum of Art is one of the few museums specializing in ukiyo-e in Tokyo and has been holding exhibitions on various themes and promoting the appeal of ukiyo-e; we will mark the 40th anniversary of the opening of the museum this January, 2020. 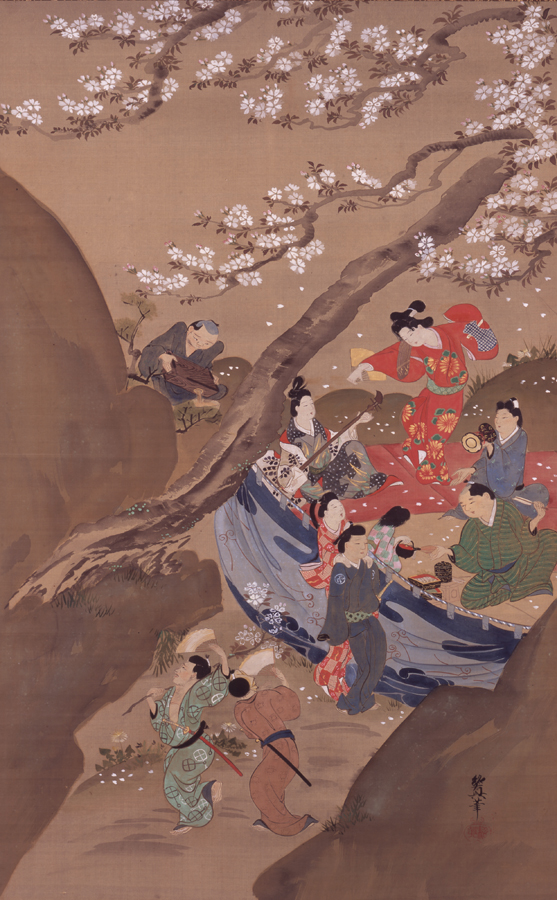 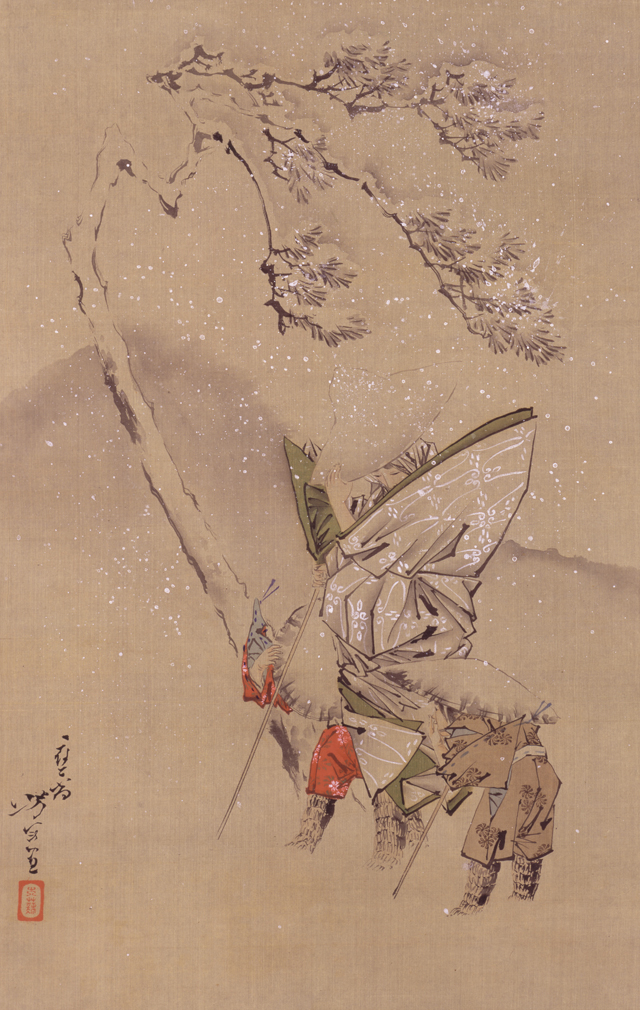 Tsukioka Yoshitoshi “Lady Tokiwa and Her Children Wandering in the Snow”

The collection at Ōta Memorial Museum of Art is known as a well-balanced collection, consisting of both woodblock prints and hand-painted ukiyo-e, from various artists and periods. We carefully selected only the famous hand-painted works for this exhibition. Starting from Hishikawa Moronobu, a succession of exhibits will follow – Kaigetsudō School, Miyagawa School, Katsushika School such as Torii Kiyonaga, Kitagawa Utamaro, Katsushika Hokusai and Ōi, Utagawa School such as Utagawa Toyoharu, Toyokuni, Kuniyoshi and Hiroshige, and Kobayashi Kiyochika and Tsukioka Yoshitoshi who were active during the Meiji period. Please enjoy the fine hand-painted works by famous artists that illuminate the long history of ukiyo-e.

Katsushika Hokusai “The Tale of Genji, Scene of Hanano-en Chapter”

Most ukiyo-e works are made using the woodblock print method by the skills of artists who draw the sketches, carvers and painters. Since the sketches by the artists get carved into the woodblocks by the carvers and are lost, there is no way for us to see the original brushwork of the artists. Compared to this, hand-painted ukiyo-e (nikuhitsu-ga) is the only kind of work for which the artist receives an order and draws directly on paper or silk. We are able to see the original skills of ukiyo-e artists such as the delicate curves and color gradation, and also can enjoy the beauty of the richly utilized inks. 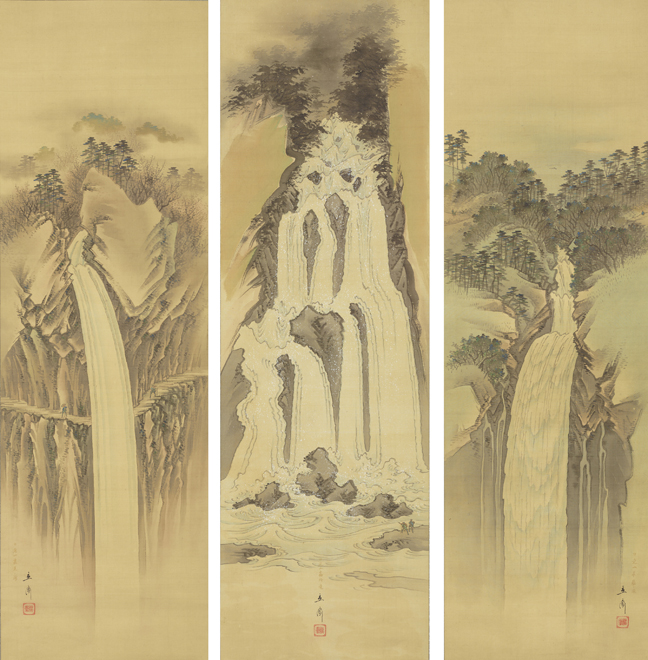 Katsushika Hokusai “Tiger in the Rain”

Katsushika Hokusai “Tiger in the Rain”

Katsushika Ōi “Courtesans Displaying Themselves through the Lattice in Yoshiwara”

Father and the daughter – Competition of two genius artists

In this exhibition, two of the most famous works at Ōta Memorial Museum of Art, “Tiger in the Rain” by Katsushika Hokusai and “Courtesans Displaying Themselves through the Lattice in Yoshiwara” by Katsushika Ōi will be on display together. “Tiger in the Rain” by Katsushika Hokusai is a masterpiece drawn in 1849, the year of Hokusai’s death. The powerful vitality of the tiger staring up at the sky in the rain, seems to symbolize the unflagging soul of Hokusai as an artist at the age of 90. It is also known as the masterpiece that in 2005 was found to be paired up with “Dragon” housed at Guimet Museum in France. Also, the work by the daughter of Hokusai, Katsushika Ōi. “Courtesans Displaying Themselves through the Lattice in Yoshiwara”, which will be on display for the first time in two years, is known as one of the representative pieces of the rare works by Ōi. It dramatically depicts the pleasure quarters of Edo and the night in Yoshiwara by the bold depiction of the light and shadows, and the figures of people emerging in the dark give it a dreamy atmosphere. There is a story that Hokusai said he was no match for Ōi at drawing pictures of beautiful women, and her extraordinary talent is clearly shown in this picture. 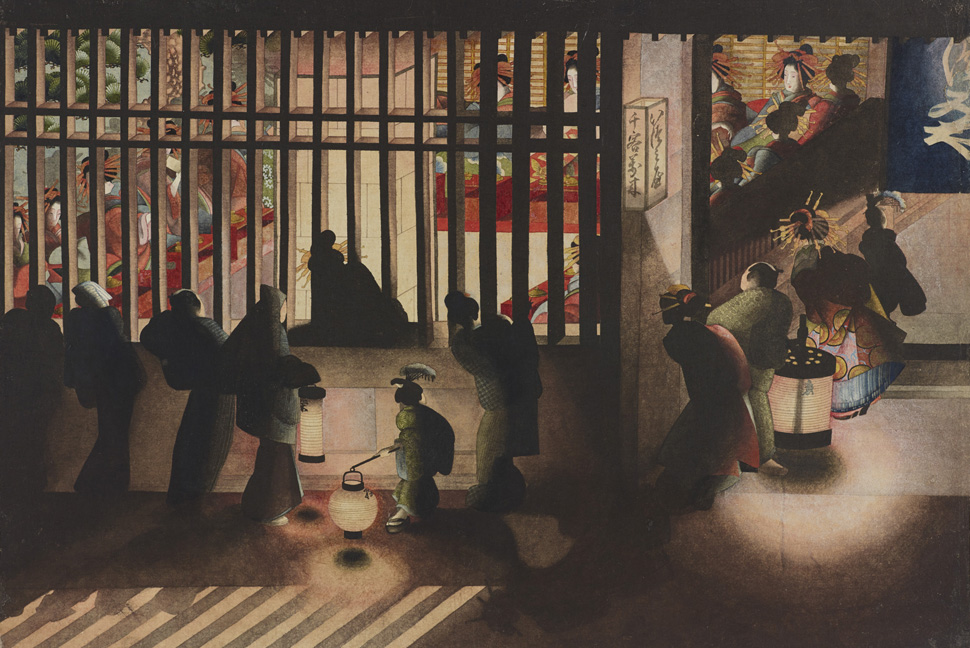 Katsushika Ōi “Courtesans Displaying Themselves through the Lattice in Yoshiwara”