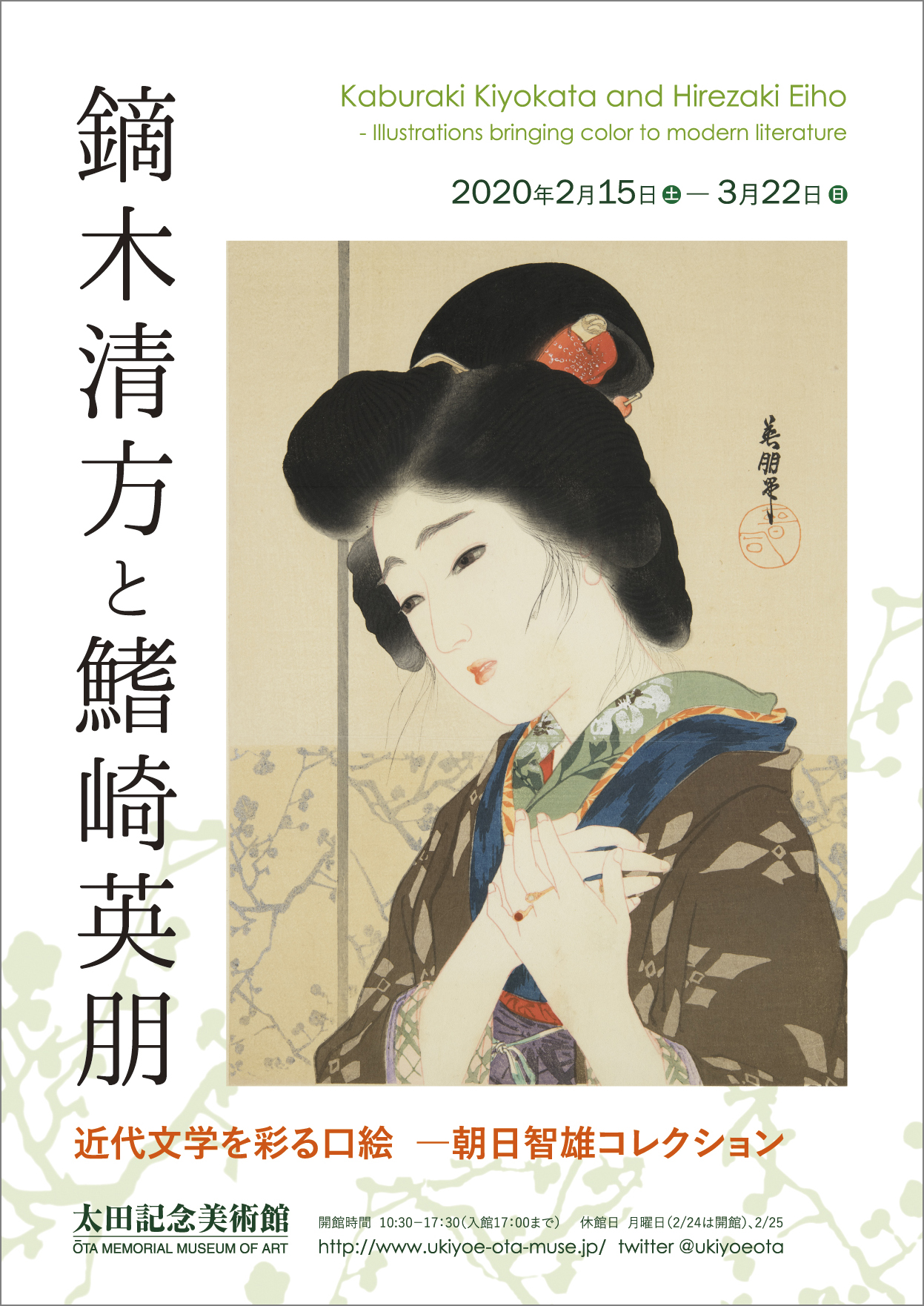 With the rediscovery of “Tsukiji Akashi-chō” in 2019, Kaburaki Kiyokata (1878-1972) gathered attention. Although he is known as a painter of Japanese art, he was also active in the genre called kuchi-e (illustrations for magazines and novels) from 1903 to 1916. At the time, Hirezaki Eihō (1881-1968) was popular alongside Kiyokata. Kiyotaka and Eihō both succeeded Yoshitoshi Tsukioka, and they were friends who belonged to the same art association. We will introduce the masterpieces of kuchi-e prints of beautiful women by Kiyokata and Eihō from the Meiji Era. 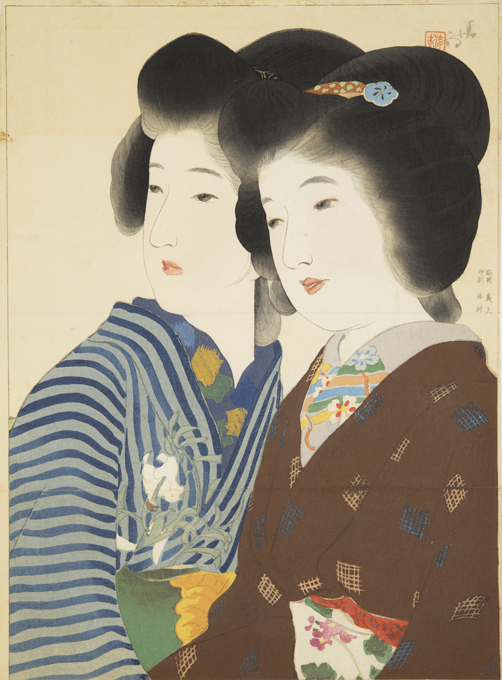 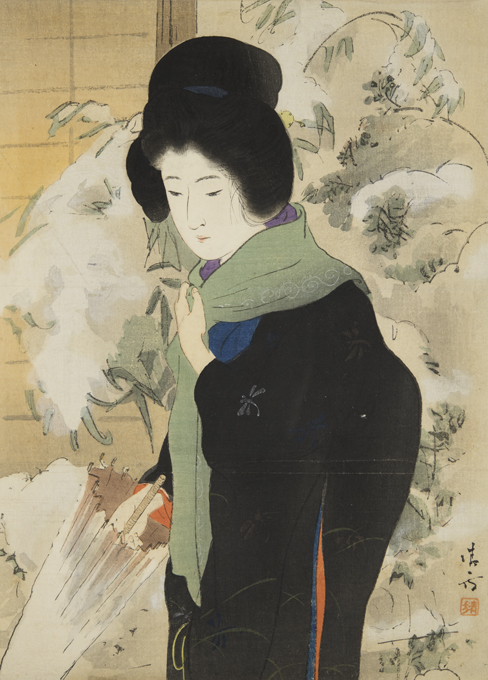 From the late 20s of Meiji Era to the early Taishō Era, kuchi-e prints made with woodblocks were used in the opening pages of the magazines and novels. Kuchi-e which brilliantly illustrated stories, did not simply inherit the mastery of ukiyo-e from the Edo period, but largely surpassed its techniques with delicate carving and painting. However, as they are rarely studied by current ukiyo-e researchers, they had been a forgotten genre. We have chosen 110 pieces from the collection by a kuchi-e collector, Asahi Tomoo to highlight the beauty of kuchi-e prints. 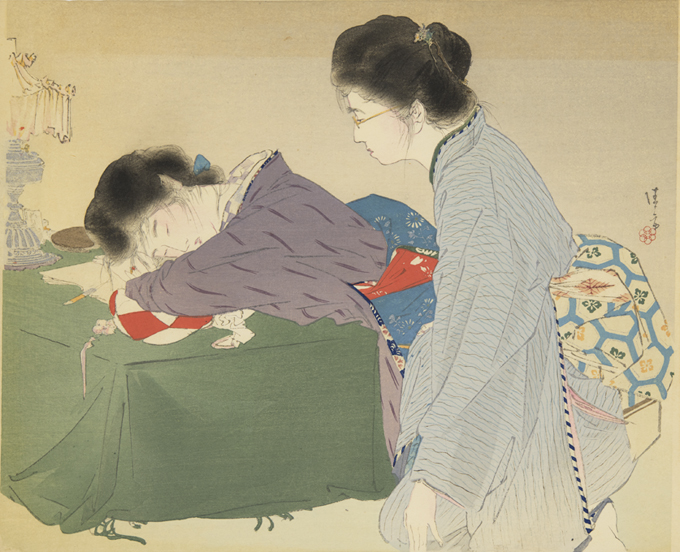 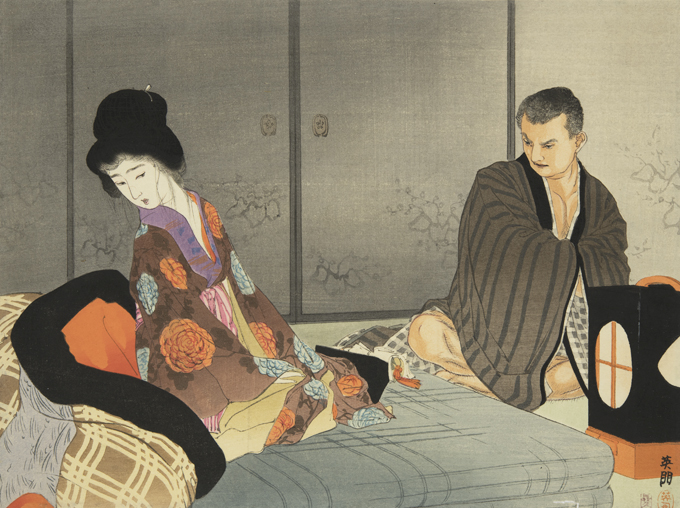 Kuchi-e prints used in the opening pages of magazines and novels were produced by more than 100 artists since the late 20s of the Meiji period. Popular artists before Kiyokata and Eihō, were Takeuchi Keishū (1861-1943), Tomioka Eisen (1864-1905), Mizuno Toshikata (1866-1908) and Kajita Hanko (1870-1917). Among them, Mizuno Toshikata, the master of Kaburaki Kiyokata, is an essential artist to study in order to understand the artworks of Kiyokata. We will introduce these four illustrators along with Kiyokata and Eihō. Tomioka Eisen “Illustration for “Kareno no Makuzu” by Mizutani Futō” 1897 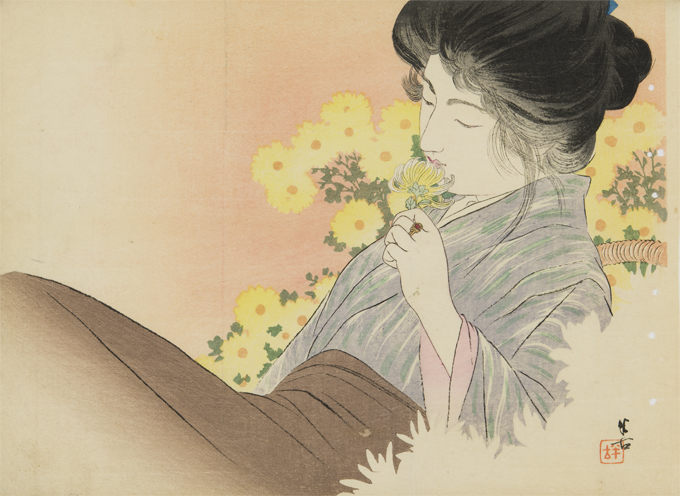 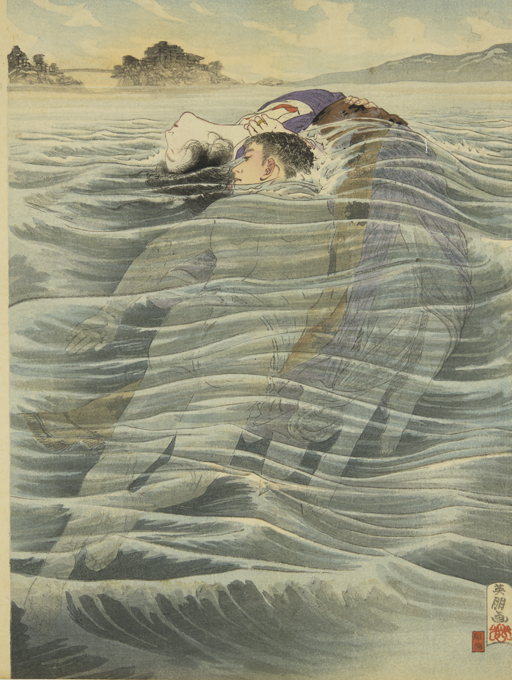 This is the kuchi-e printed on the opening page of a novel by Izumi Kyōka. Depicted is the scene where a man rescues a woman who fell into the lake from a boat capsized by a tornado. The running water fills the scene, and the characters are only vaguely seen. Excellent printing technique and an innovative composition are both incorporated in this piece. Although it is not as widely known as the relationship with Kaburaki Kiyokata, Hirezaki Eihō also had a deep connection with Izumi Kyōka. Not only had he worked on numerous illustrations for novels by Kyōka, but also had a close friendship with her.