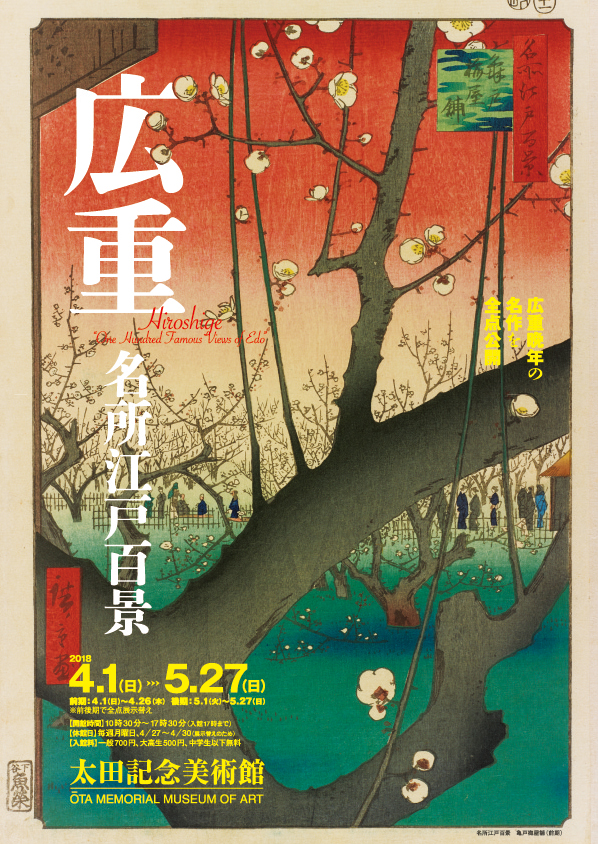 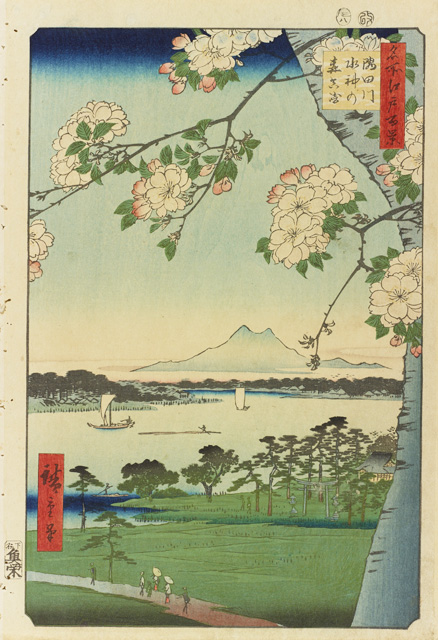 One Hundred Famous Views of Edo : Suijin Shrine and Massaki on the Sumida River (1st term)


2018 marks the 160th year since the death of Utagawa Hiroshige (1797~1858), a great master of “landscape pictures”. In commemoration, Ota Memorial Museum of Art is holding the exhibitions “Hiroshige ‘One Hundred Famous Views of Edo’” in April and May, and “Utagawa Hiroshige” in September and October. In fact, the number of Hiroshige’s works is the largest among our museum collections, with more than 2,600 pieces. This year we will thoroughly showcase the wonderful works of Hiroshige, by introducing selected pieces from our collection. For the first exhibition, we will introduce the series “One Hundred Famous Views of Edo”, which includes widely famous works, such as “Kinryūzan Temple, Asakusa”, “Plum Park in Kameido” and “Sudden Shower Over Shin- Ōhashi Bridge and Atake”. This series, on which he spent the last three years of his life, is representative of Hiroshige’s later works. This grand series consists of 120 pieces of work, including an index picture and 2 works drawn by his pupils. We will exhibit the entirety of it by separating them. The works in Ota Memorial Museum of Art is considered to be well preserved, and is one of the earlier prints, thus reflecting Hiroshige’s intents. Please enjoy the artistic world Hiroshige has reached in his later years through these excellent works.

The Sumida River with full-bloomed cherry blossoms, Kameido Tenjin Shrine with wisterias, Saruwaka-machi under the moon and Sensōji Temple in snow… About 160 years ago, Hiroshige vibrantly portrayed the city of Edo with his established technique. However, only 10 years after his death and the publishing of the series “One Hundred Famous Views of Edo”, the Edo period ended and the Meiji period started. The series captures the scenery of Edo before its drastic and rapid change after the Meiji period. Some remain the same, while some are already lost. This series is like a time capsule, which allows us to experience the atmosphere near the end of the Edo period. 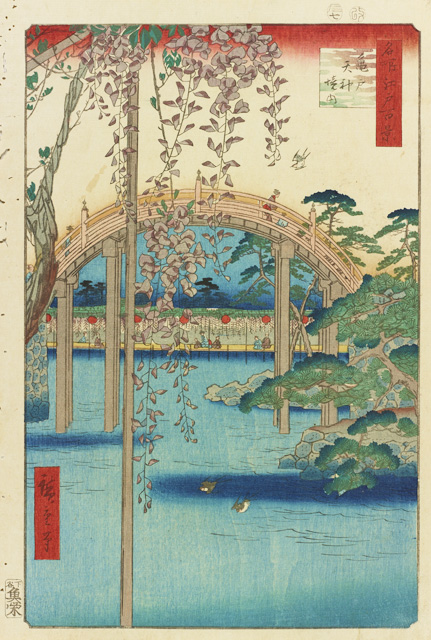 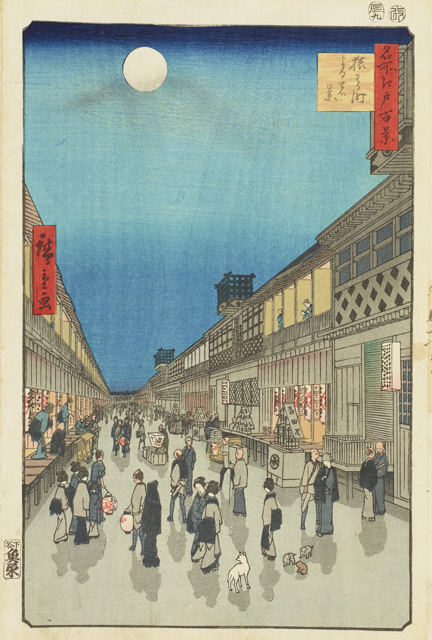 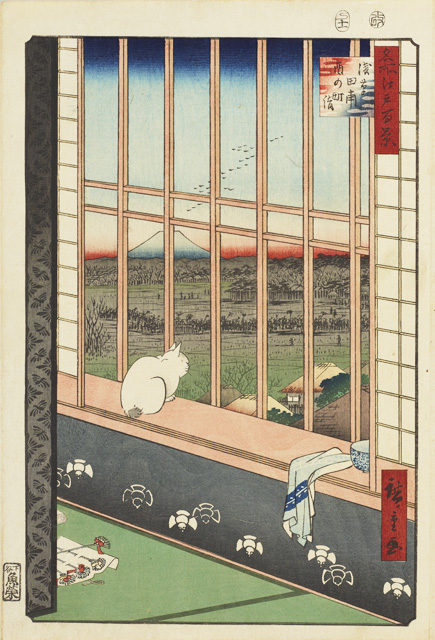 Hiroshige preferred to draw scenery on a vertical screen in his later years. “One Hundred Famous Views of Edo”, includes many unique works using this style and drawing the subject largely in the front, through extreme perspective. This bold composition even creates the feeling that we are actually in the Edo city, which gives “One Hundred Famous Views of Edo” charm like no other. We cannot help but be amazed by his passion for production paintings with new compositions, even when he was over 60 years old. 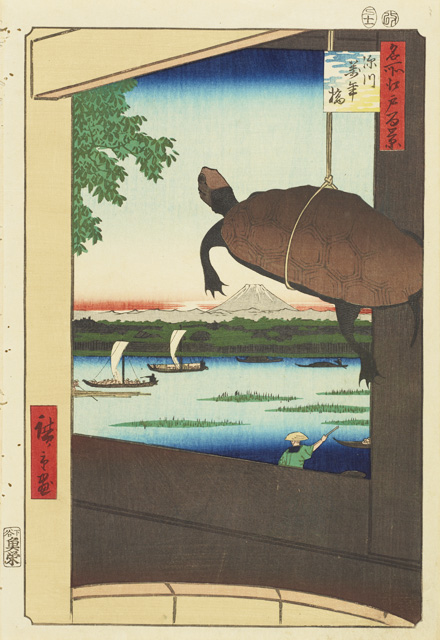 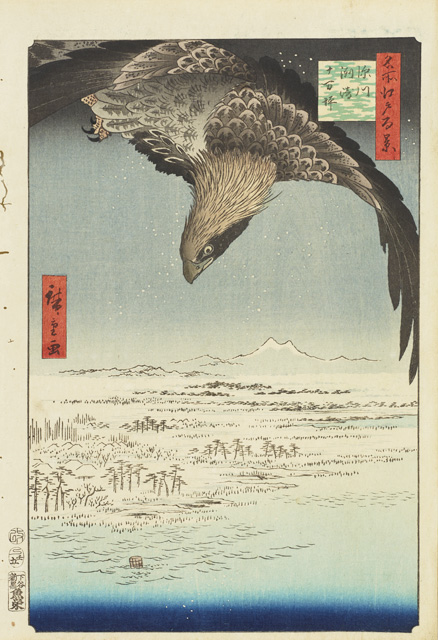 While ukiyo-e prints have various kinds of carving and printing techniques, “One Hundred Famous Views of Edo” displays the most difficult and time-consuming techniques. Some examples are, the technique of expressing rain through thin and sharp lines on printing blocks, using color graduation to express the sky or the water surface, and creating embossed surfaces by rubbing the print hard without any paints called “Karazuri”. The masterly techniques of the carvers and painters supporting Hiroshige’s works are also enthralling.

Highlight of the exhibition  Hiroshige, the one loved by Van Gogh 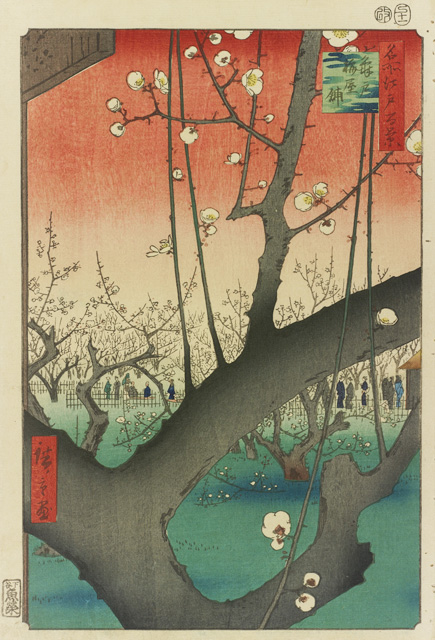 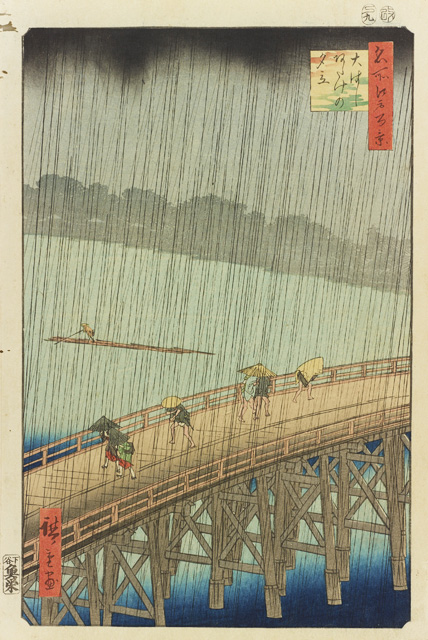 “Plum Park in Kameido” gives a unique impression, with its bright color and bold composition depicting the plum tree larger than the screen. “Sudden Shower Over Shin- Ōhashi Bridge and Atake” captures the moment when the people are caught in a sudden shower and running hastily across the bridge. Both works are popular masterpieces from “One Hundred Famous Views of Edo”.
Recently, the influence of ukiyo-e on the post-impressionist painter Vincent Van Gogh has come under the spotlight again. Of all works of Hiroshige, these two were copied as oil paintings and are known as the works that Van Gogh showed great interest. The bold composition and the use of vibrant color, achieved by established technique, must have had an impact on the artists in the Western countries. These works, which fascinate people in all parts of the world not only represent ukiyo-e but also Japanese arts.