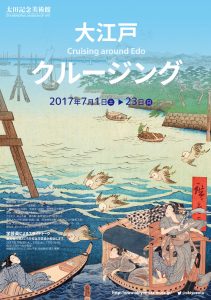 As the Tokyo 2020 Olympics approaches, there has been a growing trend to re-discover the attractiveness of the waterside of Tokyo and to consider the potential use of water transportation for tourism and as a mean of public transportation. It may be difficult to imagine now, but Edo in the old days was in fact a city of water: numerous moats and canals were built across the city, which is surrounded by the Sumida River and Edo Bay. There are a lot of ukiyo-e pictures that depict people enjoying boating on the Sumida River, and people riding on a passenger boat departing from an inn for sailors, just like riding a taxi in modern days. There are also pictures depicting boats transporting goods, which were sourced from all over Japan, into the city of Edo. Such pictures suggest that the waterside and boats played a fundamental, essential part in ordinary people’s lives. Furthermore, spending a cool evening in summer in Ryōgoku was a particularly big event in Edo. A large crowd of people used to visit this area to enjoy boating and fireworks displays, and the river was filled with numerous boats. In this exhibition, we would like to take you cruising around Edo through ukiyo-e pictures depicting various scenes of the waterside of Edo. A perfect exhibition for summer!


Cruising along the waterside of Edo

Starting from Nihonbashi, let’s cruise around the city of Edo. In this section, we will introduce pictures depicting various scenes of the waterside of Edo such as the Nihonbashi River, around Tsukudajima Island, the Sumida River, the Onagi River and Shibaura. 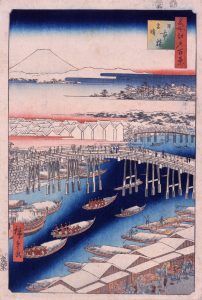 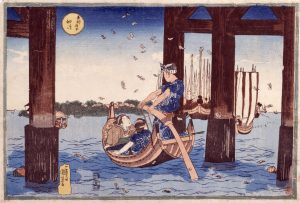 The cool breeze at the Sumida River － boating and fireworks

The Sumida River used to be officially opened on May 28th every year, which was the start of the “nōryō” (enjoying cool evenings in summer) period that lasted until August 28th. During this season, fireworks would be displayed around the Ryōgoku area, and a huge number of boats cruised on the river, carrying people enjoying boating.

Utagawa Hiroshige “Famous Places in the Eastern Capital : Cooling off at Ryōgokubashi Bridge”

Leaving Edo, setting off to the seas around Japan

After enjoying the waterside in Edo, let’s cruise along the waterside of other parts of Japan. In this section, we will exhibit the pictures of Enoshima Island which was a popular destination of pilgrims, and ports of various districts in Japan which prospered from the shipping business.

Various boats in the Edo period

In this section, we will introduce various kinds of boats and ships depicted in ukiyo-e, from pleasure boats used for boating such as “houseboats” and “food-vending boats” to the wooden sailing ships used for shipping. 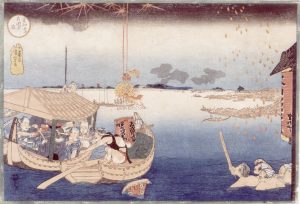 Utagawa Kuniyoshi “Famous Places in the Eastern Capital : Cooling off at Ryōgoku”

A houseboat is proceeding on the Sumida River. The bridge on the right is probably Ryōgoku Bridge, and the opposite bridge on the left of the boat is Nanba Bridge over the Yagenbori canal. This work depicts a scene in which Kabuki actors are enjoying boating on the Sumida River on a hot day in summer. Kabuki actors such as Ichikawa Danjūrō VIII and Bandō Shūka I can be seen in the boat, as well as food served on dishes. However, what draws the viewers’ attention most in this picture is the actors swimming in front of the boat. They are not only swimming but also performing funny movements such as the “flog stroke,” “mortar stroke,” “treading water,” and the “drowned-body stroke,” which are reminiscent of synchronized swimming in modern days. The actors on the boat seem to enjoy drinking and looking at their desperate swimming. In addition, it makes us feel a little sorrowful due to the fact that while the actors on the boat are young stars, the actors in the water, such as Nakayama Bungorō II and Ichikawa Hirogorō I, are supporting actors who were not of high social standing.